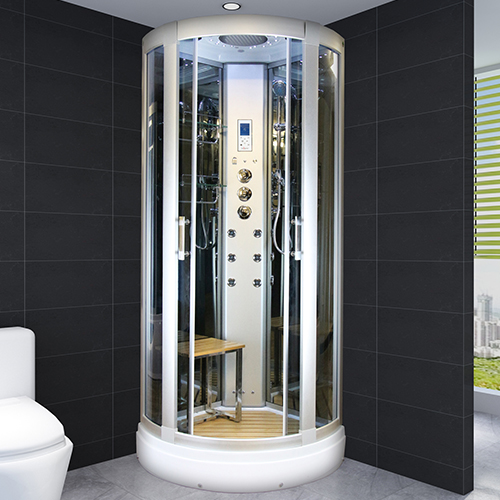 The INS9012 stands unique within the range of Insignia Showers. An 800mm quadrant, it is not only the smallest shower we do within our steam range, but now it is officially the smallest in the entire range, but don’t let that deter you. Petite perfection is the INS9012, luxurious in it’s style and design it can fit into the more modest-sized bathrooms. Why should larger bathrooms reap all the benefits? Here at Insignia we cater for everyone and are proud of the variations in size, shape and features that we provide. It's the age-old saying, the best things come in small packages, and it could not be more pertinent when describing the INS9012. Emerging from the shadows of the GT9012, we have upgrades across the board with this shower. We will start, as usual with the control panel. Upgraded from the standard FM Radio on the previous model, you now have that plus the Bluetooth connectivity feature. With over 90% of the adult population in the UK owning a smartphone or device that has Bluetooth, never before has device connectivity been so important. Now you can listen to your very own playlist, that latest album, the most recent upload in your series of podcasts, or that audiobook you physically can’t stop listening to, all whilst you enjoy the delights of the shower. Whether you are just going through the daily motions or if you are kicking back and relaxing having a good steam, now you can enjoy the time with audio of your choosing. Space was always the issue in this compact cabin, and we have done what we can to streamline the shower, whilst still giving you more, magic right? Unfortunately, no, just innovative design. We have removed the steam pod, found on the back panel, and replaced it with our more aesthetically pleasing and space saving ‘Tri-Jet Steam System’. Along with this, the bulky and awkward foot massager has been completely removed from the cabin. After taking a poll of 1577 customers, a whopping 96% stated they had never, nor would they ever use it. With results as overwhelming as this it became a real no brainer when we considered removing it as the extra space inside the cabin made a huge difference. We’ve also improved the internal lighting, by swapping out the traditional halo ring light and replacing it with multiple white LED bulbs to create better luminosity within the cabin. Added to that the spectacular mirrored back panels, the lighting bounces around the cabin, brightening not only the shower, but your bathroom as well. Of course, we innovate and upgrade where we can, but we don’t fiddle and tweak for the sake of it. Some things remain the same, because why mess with a winning formula. The ever popular hydro-massage jets still remain situated within the column in a cluster of 6. The multi-function hand shower is located on a riser rail for preferred height setting and last but not least, the most popular showering feature across the entire range, the monsoon rain shower built overhead into the roof enclosure. Standing in as the cheapest of the steam shower range, there are many reasons why the INS9012 is right for you. Make your next shower, an Insignia steam shower and enjoy all the benefits we offer. [video width="700" height="350" ]https://www.youtube.com/watch?v=r53B-2H5Pmo[/video]
19/07/2016 | View: 85 |   By: Jay